The linked article tries to claim that the "Bible Belt" has a higher divorce rate than the national average. If you read the article carefully you learn how the liberals behind the hit piece on Christians have cherry-picked the comparisons they make.

It's all in the percentages.

The divorce rates get pushed even LOWER if you compare divorce rates as a percentage of first marriages, excluding the divorces of people like Larry King who accumulate five or more ex-wives.

The next time someone tries to claim people in the Bible Belt are failing to live up to God's standards when compared to liberals, play close attention to their arguments and the numbers they use.
Posted by Alexander Cornswalled at 9:20 AM 8 comments: Links to this post

For ten years, Dennis Markuze has been issuing death threats to atheists, journalists, entertainers and scientists. The deranged, inarticulate and repetitive nature of these threats have long been attributed to a diseased mind. Despite a decade of death threats, the Montreal police, who have jurisdiction over this person, have taken NO action against him.

A closer look at this man reveals a perplexing blend of alleged Christian fundamentalism and a near worship of Nostradamus.

Despite repeated efforts to engage him in conversation and discussion he has never done anything but repeat the same template driven insanity. There has been no variation, no thought, no research. It's as if the writing of Dennis Markuze is a character, a facade, and a poorly executed one at that.

Why put up this facade? And why are the Montreal police, the police department for a very liberal area, so determined to ignore an alleged conservative who is out for liberal blood?

The answer is simple. My theory is that Dennis Markuze is not the deranged madman he pretends to be. If he really were as violent and bloodthirsty as he claims, why would he attend and atheist convention with a backpack capable of concealing a bomb and do nothing but run?

The answer is simple. David Mabus (Dennis Markuze) is a deep cover liberal whose goal is to mock conservatives and make us look like psychotic lunatics. I suspect the Montreal police are taking no action against him, not because they'd rather he snap and kill someone first, as they claim, but because they already KNOW he's an act. The only rational reason for the Montreal police to take no action against a man who has been issuing death threats for ten years is if they know he's a fake and are in on it.

David Mabus (Dennis Markuze) I challenge you to do the right thing and confess your fraud. You are a fake, an act, a pretender. You are a liar defaming good Christian men and women with your routine. You are a sloppy, humorless, incompetent version of Borat. Stop libeling and slandering real Christians with your act. 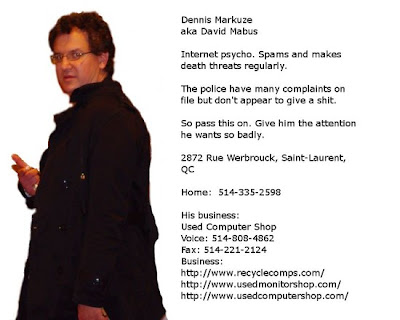 Posted by Alexander Cornswalled at 8:04 AM 30 comments: Links to this post