The adulterer Bill Clinton has a long history of debauched behavior. His wife included a version of the infamous "death panel" in her draft of a national socialist health care plan during his administration. Now it seems Clinton is dabbling in VooDoo.

The "Power Balance" bracelet is a silicone wrist band with an embedded hologram. The claims made by the manufactures are scientifically unfounded, but heavily steeped in Eastern Mysticism.

Bracelet claims balance improvementReporter: Frank Pangallo Broadcast Date: December 15, 2009It is called a Power Balance Bracelet and whatever some people claim to feel when wearing one defies their belief and logic.Tom O'Dowd has the Australian rights for the bracelet which sells for around $60.The secret, he claims, is embedded in the hologram on the band and so-called Mylar technology."In the Mylar hologram is a frequency and the frequency as soon as it comes into contact with the electrical field of your body basically works with your body's electrical field that gives you a feeling of wellness," Tom claims.Tom alleges he can demonstrate straight away that it improves balance, strength and flexibility.Mylar technology supposedly restores the body's frequency to somewhere near the 7.83 hertz required."This will make you the best you can be, it won't turn you into Tiger Woods let's put it that way, but it will make you the best you can be," Tom claims.


In other words, they're magic, the very sort of thing banned in the Bible. The company making them even has a statement on their web site admitting there's no evidence they work.

Now, Bill Clinton is wearing one. 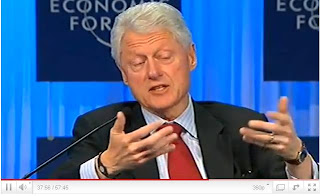 You can see the video here:

I wonder what Bubbah needs to compensate for. Perhaps his heart isn't strong enough to get a Viagra prescription and this is his next desperate attempt to keep up with his affairs.
Posted by Alexander Cornswalled at 7:56 AM